The purpose of this episode is to understand how SAR-related techniques can be used in order to monitor landslides.

We consider in particular the analysis of the Vallcebre landslide (Spain), which has been conducted by Michele Crosetto (CTTC) and other researchers, see for details the paper in Nat. Hazards Earth Syst. Sci., 13, 923–933, 2013 www.nat-hazards-earth-syst-sci.net/13/923/2013/.

To monitor the above mentioned landslide, a research group formed by the Institute of Geomatics (now the CTTC) and the Department of Geotechnical Engineering and Geosciences of the Technical University of Catalonia used the Differential Interferometric Synthetic Aperture Radar (DInSAR) technique combined with corner reflectors (CRs).

This satellite-based DInSAR deformation monitoring technique can be used to derive precise deformation measurements. However, this technique has strong limitations (lack of coherence) over vegetated areas, as it is the case in the Vallcebre landslide. For this reason, the study was based on devices that guarantee good DInSAR measurements: such devices are called artificial corner reflectors(CRs).

The Vallcebre landslide is a set of shale, gypsum and clay stone layers gliding over a thick limestone bed. The average slope is 10 degrees. It was monitored during the last 25 years with different techniques. For instance, the GPS measurements were introduced in 1994. The use of DInSAR is of interest, because it is more precise than GPS (for the vertical displacements) and is a remote-sensing technique, while GPS requires in-situ campaigns.

The researchers installed seven CRs in strategically selected locations and analysed the period in 2006-2008.

Particular attention was paid to the geometry and the orientation of the CRs. 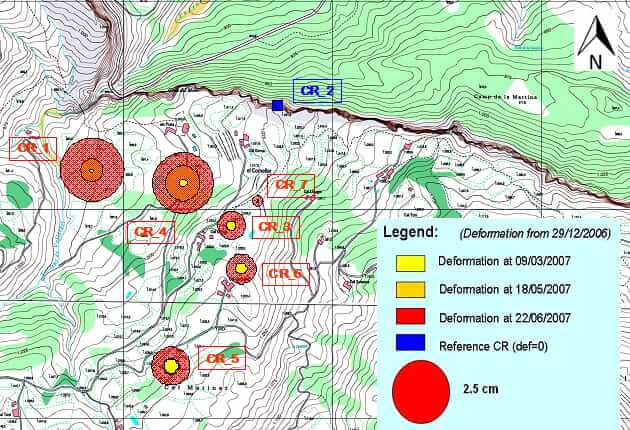 As you can see from the above figure (2006-2007 campaign), the CRs installed on the Vallcebre landslide show several patterns of movement, being CR1 and CR4 the most active part, with displacements between 2 and 2,5 cm. Those displacements correspond to a period of abundant rainfall. The landslide does not present homogeneous behaviour over time.

Manage Cookie Consent
To provide the best experiences, we use technologies like cookies to store and/or access device information. Consenting to these technologies will allow us to process data such as browsing behavior or unique IDs on this site. Not consenting or withdrawing consent, may adversely affect certain features and functions.
Manage options Manage services Manage vendors Read more about these purposes
View preferences
{title} {title} {title}